The badger (Meles meles) is the largest terrestrial carnivore in Ireland, instantly recognisable by its white head with conspicuous dark stripes through the eyes.

Badgers are powerfully built; their bodies are stocky, with a relatively small head, a short thick neck, short muscular legs and a bushy tail. The hair is black and white, but overall, the body appears grey when seen at a distance. They are widespread throughout Ireland, but, being secretive and principally nocturnal, they are seldom encountered in the wild.

Unlike their mustelid cousins (otters, stoats, pine martens and American minks), the badger is a highly social animal, living in small groups (or clans) in burrow systems known as setts. Each clan defends a territory, which will include a mosaic of habitat types that provide cover and foraging habitat. They are omnivorous, have no natural predators in Ireland, and they cause little damage to agricultural crops. However, they may cause outbreaks of bovine tuberculosis in cattle herds, and, hence, have been the subject of considerable research in Ireland and ongoing control programmes.

The European badger (Meles meles) has a range across western and central Europe (with variants in Eastern Europe, Asia and Japan, now considered to be separate species). Recent studies suggest that the Irish badger population has closer genetic affinities with the badgers of Spain and Scandinavia rather than with those of Britain and central Europe. There is a continuing debate about the origin of badgers in Ireland, with the possibility of the species having been introduced by early settlers in the Neolithic period.

Badgers are found throughout Ireland in areas of suitable habitat: large swathes of the Irish countryside provide ideal conditions for badgers, with their mosaic of pasture grasslands, hedgerows, and areas of scrub and woodland. Badger densities are lower in upland and mountainous areas, areas of bog, and marginal pasturelands along the Atlantic fringe.

Badgers are adept diggers and almost always excavate their own setts, though they will also make use of disused structures, caves, and crevices in rocky outcrops. The Badger and Habitat Survey of Ireland (1995) found 35% of badger setts in hedgerow, 19% in scrub and 18% in woodland habitats. Several setts will be present within a badger group’s territory but the focus of the badger group is known as the ‘main’ sett. The main sett is situated roughly central within the group territory and is usually occupied throughout the year and used as the principal breeding sett. An active main sett is characterised by considerable signs of activity, such as copious bedding, nearby latrine (defecation) sites, and well-used paths. A main sett might occasionally just have one or two entrances, but more typically, it will have numerous entrances and chambers. Large soil heaps outside the sett entrances are indicative of a large underground tunnel and chamber system. Other setts within a group’s territory are usually smaller and only used intermittently or seasonally.

A very large main sett can possess 300m of tunnel and 20 or more chambers. Setts are often utilised by generations of badgers and may be enlarged each year, and collapses can occur too. The size of the sett is not indicative of the number of badgers present. In Ireland, with its relative lack of woodland, many setts are situated in hedgerows, and sett size is then constrained by the habitat available.

Badger group size is highly variable, and can be upwards of ten individuals. Typically, however, badgers live in social groups of two to six individuals (mean c. 4), typically headed by a dominant male and female. Single sex groups are known to occur, and badgers can be solitary in less favourable habitats.

Male badgers defend their territories regularly during the breeding season; very aggressive encounters between individuals of adjoining groups can lead to injuries. The group’s territorial boundaries are marked with faeces at latrine sites and well-marked boundary paths. Studies in several Irish counties have shown that territory size can vary from as little as 15ha to almost 300ha, with a mean of about 80ha.

Whilst badger mating can occur at any time of year, most take place between February and May. Male aggression and territorial behaviour increases from February onwards. Delayed implantation of fertilised embryos until late winter results in a true period of gestation of two months, with all cubs being born over a period from mid-January to mid-March, peaking in February. Litter sizes vary from one to five but are usually two to three. The cubs will suckle for up to three months, and remain below ground for about eight weeks, emerging in late April or May, and they do not become independent until about four months old, but may remain with their mother over the winter period. Males reach sexual maturity by their second year, females often by their first year. The mortality of cubs is high in the first year; badgers in the wild rarely exceed six years in age (maximum life expectancy up to 14 years).

Badgers are omnivores, feeding on a wide range of plants and animals; their diet is dominated by crane fly larvae (leatherjackets), moth larvae, earthworms, wasps, bees, and frogs, but badgers will take all manner of invertebrates, small vertebrates, and a variety of plant food – fruits, berries, cereals, fungi and roots. They will also eat carrion if available. Badgers rely on a good sense of smell and hearing when foraging. Their eyesight is good at low light levels but poor over longer distances. A badger group’s territory will include a variety of habitats to allow for foraging at different times of year when some prey items, such as earthworms, are scarce or hard to obtain. They gorge themselves on available food, especially in autumn, gaining as much weight as possible before winter.

Badgers do little harm to agricultural crops or to other animals in Ireland.  Nevertheless, there has been a history of badger-baiting in Ireland, a blood sport that continues clandestinely to this day. In addition, there remains persistent illegal persecution involving snaring and disturbance to setts. Mortality on roads is frequent and can lead to localised extinctions.  Badgers are implicated in the spread of bovine tuberculosis to cattle, with up to 25% of badgers being infected in some localities. Badger numbers have been substantially reduced in some areas in Ireland since the 1990s – during the Four Areas Project (a research programme on badgers and their role in bovine tuberculosis) and under a strategy of localised control in response to TB outbreaks (operated by the Department of Agriculture, Fisheries and Food). Development of a badger vaccine against TB is underway.

Estimates of badger numbers in Ireland have been revised downwards from those first reported in the Badger and Habitat Survey of Ireland, 1995. Recent estimates, based on an extrapolation of data from four counties, and with consideration of smaller group sizes in areas of less favourable habitat, have suggested a population of 84,000 badgers in the Republic. The badger is not considered endangered in Ireland; it has been estimated that one in five badgers have been culled over a ten year period to 2006.

Dr Chris Smal commenced research on Irish mammals in 1974 and conducted the Badger and Habitat Survey of Ireland from 1989 to 1995 and, thereafter, was involved in additional badger studies for the Department of Agriculture, Fisheries and Food. He is presently an independent wildlife consultant. 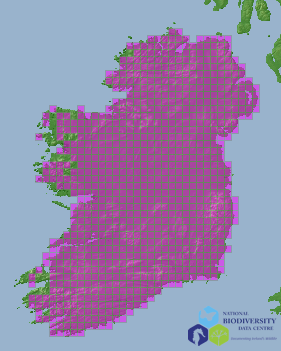 Identifying feature:Stocky powerful body with relatively short legs and a short tail. The distinctive head is white with two black stripes through the eyes from the muzzle to the ears. Body appears grey overall.

Diet:Omnivorous and opportunistic feeder. Diet dominated by crane fly larvae, moth larvae, wasps, bees, frogs and earthworms, but will take all manner of invertebrates, small vertebrates, and a variety of plant food.

Habitat:Widespread and occur in a wide variety of habitat types, but generally associated with mosaics of pasture, woodland, scrub or hedgerow. Does occur in urban areas also, where foraging habitat is available and disturbance is minimal.