Last year, I started my PhD at Sussex University in collaboration with Vincent Wildlife Trust, to study one of Britain’s rarest mammals, the barbastelle. Considered to be ‘near threatened’ by the International Union for the Conservation of Nature, as well as being an Annex II species (meaning it has special areas of conservation designated to it), the barbastelle has become one of our most beloved bats. Until recently, however, barbastelles have received a surprising lack of attention in the literature despite being a species of conservation concern. This PhD is therefore focused on gaining a better understanding of the distribution of barbastelle maternity colonies and how this relates to the wider landscape. The research not only aims to improve our understanding of the elusive barbastelle but also hopes to provide landscape-scale conservation advice for this species here in the UK, which is in line with VWT’s conservation-led research and landscape-scale delivery of conservation actions. 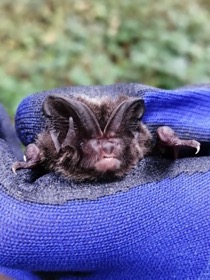 The main challenge for this PhD, whilst theoretically simple, is somewhat difficult to address in practice…. How do we determine if a woodland is occupied by a barbastelle colony? Identifying woodlands that provide important roosting habitat can be a time-consuming process and has traditionally been reliant on the capture and/or radio-tracking of individual bats. The limited opportunities for conducting barbastelle radio-tracking studies, along with the rarity of this species, has consequently meant only a handful of colonies are known across England and Wales. This presents a problem, not only because it is likely to be an unfair representation of their current distribution and density, but because the sparsity of data on colony sites will make any landscape-scale analysis of habitat preference more challenging. 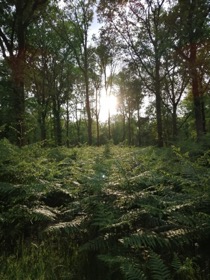 Barbastelles rely on mature woodlands for their maternity roosts

Therefore, last summer I spent my time exploring how acoustics may be utilised to help identify woodlands containing maternity colonies. The basic principle is something already widely recognised amongst bat workers but an aspect which has not been formally investigated; that if you record a high number of echolocation calls near sunset then a roost is likely nearby. To determine the relationship between colony presence and pass rate, I deployed static detectors at a number of ancient woodland sites across Wiltshire, Herefordshire, and West Sussex. The work culminated in over 5,500 barbastelle recordings spread over 40 nights. By comparing activity levels across different woodlands, I started to better understand the role that acoustic data can have in determining woodland occupancy. Importantly, I was able to establish the minimum survey effort, in terms of number of static detectors, needed to ensure a high level of confidence in any conclusions drawn about woodland occupancy by barbastelle colonies. 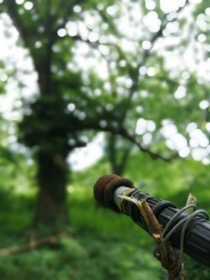 This research has now led to the establishment of a protocol for the monitoring of woodlands for the presence of barbastelle maternity colonies. With the assistance of dedicated bat groups and volunteers, the hope now is to implement this protocol to survey woodlands on a large-scale. Volunteer contributions will form an essential aspect of the research but also provide opportunities to expand and utilise survey skills.

Unfortunately, this is where we hit our problem. With the uncertainty surrounding the reopening of universities, as a result of the current pandemic, and therefore the recommencement of fieldwork, I have had no choice but to suspend the roll out of this scheme for this summer. Whilst this is a huge disappointment, this work will be continued next year and I hope to work with many of you when that time comes.

Although this project will not continue until next year, if you wish to express an interest in the project or volunteer in the future please contact me directly.

Surveys will be limited to the counties of Wiltshire, Herefordshire, West Sussex, and Norfolk. They will involve the deployment and collection of detectors at specified locations within woodlands. Equipment may be loaned if needed.